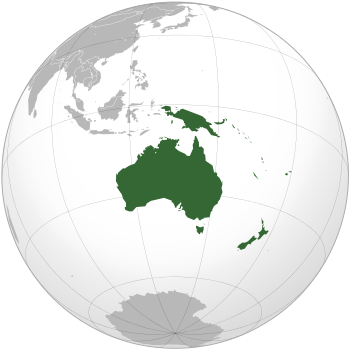 Oceania (UK /ˌoʊʃɪˈɑːniə, ˌoʊsɪ-/ or US /ˌoʊʃiːˈæniə/), also known as Oceanica, is a region centered on the islands of the tropical Pacific Ocean. Opinions of what constitutes Oceania range from its three subregions of Melanesia, Micronesia, and Polynesia to, more broadly, the entire insular region between Southeast Asia and the Americas, including Australasia and the Malay Archipelago.

The term is often used more specifically to denote a continent comprising Australia and proximate islands or biogeographically as a synonym for either the Australasian ecozone (Wallacea and Australasia) or the Pacific ecozone (Melanesia, Polynesia, and Micronesia apart either from New Zealand or from mainland New Guinea).

The term was coined as Océanie circa 1812 by geographer Conrad Malte-Brun. The word Océanie is a French language word derived from Latin word oceanus, and this from Greek word ὠκεανός (ōkeanós), ocean. Natives and inhabitants of this region are called Oceanians or Oceanicans. 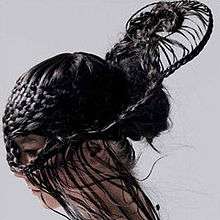 "Oceania" is a song recorded by Icelandic singer Björk for her sixth studio album Medúlla. It was written and produced by Björk, with additional writing by Sjón and production by Mark Bell. The song was written by the singer specially for the 2004 Summer Olympics Opening Ceremony, after a request by the International Olympic Committee. "Oceania" was released as a promotional single in 2004, by One Little Indian Records. The song was written at the ocean's point of view, from which the singer believes all life emerged, and details the human's evolution, whilst accompanied by a choir. "Oceania" was generally well received by music critics, who believed it was the best track from Medúlla, although some thought it was not the best choice for a promotional release.

The accompanying music video for the song, directed by Lynn Fox, features Björk as "Mother Oceania", whilst being jewel-encrusted in dark watery depths, with a colourful sunset and swirling floral creatures above her. A remix of the song, featuring additional lyrics and vocals by Kelis on her point of view of the continents, was featured as a B-side to the "Who Is It" single. A piano version also appeared on the DVD single, and was assisted in its creation by Nico Muhly. The song was premiered during Björk's performance on the Summer Olympics ceremony, and was later included on the setlist of the Volta Tour (2007–08). At the 47th Grammy Awards in 2005, it was nominated in the category of Best Female Pop Vocal Performance. Cover versions of "Oceania" were done twice, while it was sampled once.

Oceania is a board game by Klaus Teuber, published by Mayfair Games. It is a simpler version of Entdecker, and is played with one or two players. The solitaire version's objective is completely different from the two player version's.

Each player, in turn, places a wooden ship on one of the starting spaces or on a tile already placed. At the beginning of the game, of course, the only spaces available are starting spaces. These spaces appear on three sides of the board; the fourth side is a continuation of the ocean frame, but the ship cannot start there. Then, the player picks one tile from the top of the pile. Each tile has four sides, with water or land on each side. All of the possible combinations that have water on at least one side are included, with varying frequencies, in the pile. (The water, land, water, land tiles show two island fragments, one on each side with a strait going down the middle, not the other way around.) Tiles placed into the board must match water to water and land to land. If a tile fits, the player must place it. Each player has pieces in one of the two colors (white or black) depicting one, two, or three scouts. Players may place one scout piece on the tile that was placed if it has land on it (if it is the WLWL piece, the scout piece may be placed on either side). If a tile does not fit, it is placed in front of the player. Later in the game, the player may choose to give up one scout piece from the supply in order to place one of these pieces on the board. If an empty space is completely surrounded, it is filled with reserve tiles of the correct variety, which are next to the board. If a number of spaces are surrounded with only land, they are filled with tiles from the reserve pile that have land on all four sides. 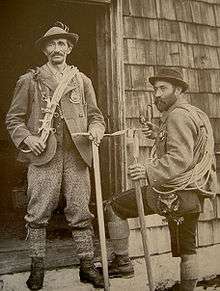 Explorers in the past venturing into territory unknown by their own people invariably hired guides. Lewis and Clark hired Sacagawea to help them explore the American West, and Wilfred Thesiger hired guides in the deserts that he ventured into, such as Kuri on his journey to the Tibesti Mountains in 1938.

Tour guides lead visitors through tourist attractions and give information about the attractions' natural and cultural significance. Often, they also act as interpreters for travellers who do not speak the local language. Automated systems like audio tours are sometimes substituted for human tour guides. Tour operators often hire guides to lead tourist groups.

Mountain guides are those employed in mountaineering; these are not merely to show the way but stand in the position of professional climbers with an expert knowledge of rock and snowcraft, which they impart to the amateur, at the same time assuring the safety of the climbing party. This professional class of guides arose in the middle of the 19th century when Alpine climbing became recognized as a sport. 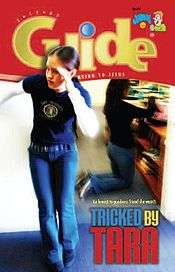 Guide magazine is a Seventh-day Adventist weekly periodical published by Review and Herald. It is a Christian story magazine that uses true stories to illustrate Bible passages and is targeted to 10- to 14-year-old youth.

Guide is often distributed to "Earliteen" and "Junior" Sabbath School students at the end of class and provides a Bible study guide for the week. Since its beginning, Guide has been popular reading during the church service for young people.

The magazine is published in a 32-page full-color 6x8" format.

In the years following World War II, the Adventist church had two magazines for children – Our Little Friend for children preschool to preteen and Youth's Instructor for older teenagers. A magazine for junior-age youth was originally proposed at the 1951 Autumn Council of the Seventh-day Adventist Church and voted in Spring Council on April 9, 1952 designating the Review and Herald as the publisher. A relatively young 27-year-old pastor from Northern California, Lawrence Maxwell became the first editor.

Such guides may have many different forms: Comprehensive or highly selective, printed or electronic sources, annoteted listings or written chapters etc.

Often used as curriculum tools for bibliographic instruction, the guides help library users find materials or help those unfamiliar with a discipline understand the key sources.